This was a party for my own family – it may give you some theme ideas!

J is mad about Octonauts and wanted an Octonauts party for his 3rd Birthday!

First came the Octonauts – several evenings of playing with Fimo! After burning my first Kwazii and re-doing I was really pleased how they came out. ( I can never seem to get Fimo right the first time – I blame my oven… same as I do when I cook!)

I wanted to cake to have the Wow factor – only thing is my ideas do outdo my cooking skills! After 6 hours, tears and 3 cakes in the bin this was the result! I wasn’t sure how it would taste though as it didn’t rise the best so my lovely friend Rachel kindly made me a Victoria Sponge as a back up! It was delicious and we served it to the adults but the children all seemed to like the Octocake! My fimo figures helped to decorate it too. 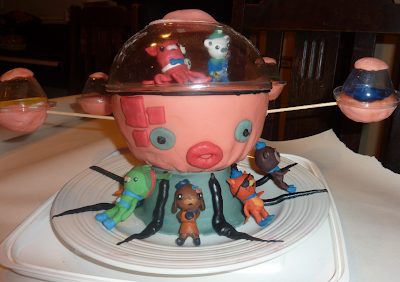 I spent a lot of time on ‘Sub nautical’ themed food and then forgot to photograph most of them!! Here are a few bits I did manage to capture …

J wanted to be Dashi Dog for his party. I made a belt out of blue foam and he wore brown leggings and a vest. We added Dashi style hair clips in his hair and blue wellies and he really looked the part! He wanted his green Bunny to be Shellington but I finally managed to convince him that Bunny would make a better Tweak! Mutzey (his monkey) ended up as Shellington. 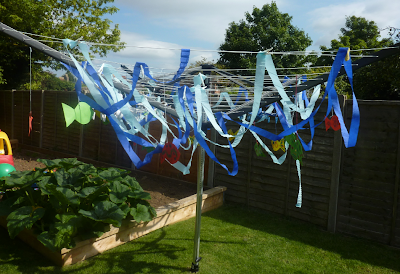 We then decorated the garden. Fish went up on the rotary drier with streamer waves, and the trampoline became the Octopod with the help of 6 rolls of Orange Streamer!!

One of the big hits of the party (and the cause of most arguments!) was the Octo-alert! I thought for ages how I would make an Octoalert and then discovered talking tins (found here). You can record your own message and play it back when you press a button on the front. I covered it in foam a la Octoalert and it was certainly a big hit!

Games wise we played a mixture of both Octothemed and games to music.

I printed and laminated around 12 of every Octonauts character and hid them around the garden. This was a great start to the party and the children enjoyed seeing how many characters they could collect and take home. We also had enough left from the party to play snap with too! 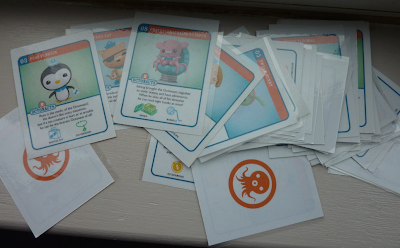 We played pin the hat on Kwazii which they enjoyed.

I laminated pictures of the Octopod with a pack of fish stickers for each child to decorate – I wondered whether this should be a party bag toy but in the end it was nice for the children at the party wanting more quiet time. 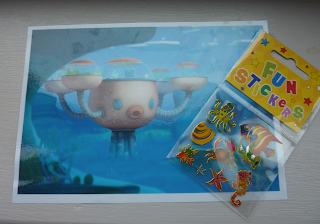 Over all we were so lucky with fantastic weather and the paddling pool certainly got some use! It was a great day and I think the last to leave were about 10.30pm which is pretty wild for a 3 year old’s party!!! 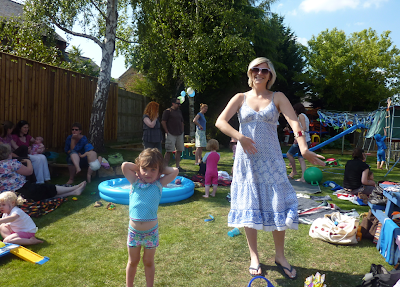 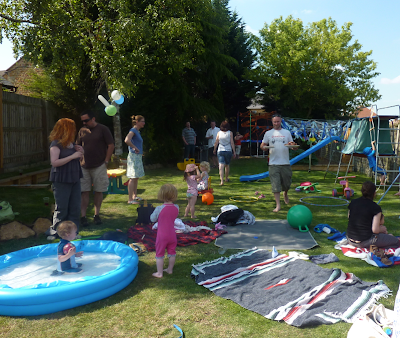